How To Trade Forex With Japanese Candlestick Patterns

What are the Japanese Candlesticks?

Japanese candlesticks is a visual form for displaying charts invented in the 18thcentury by a Japanese rice trader named Munehisa Homma. They differ from bar charts and line charts, because they give more information and can be more easily read. Let’s take a look at the image below: 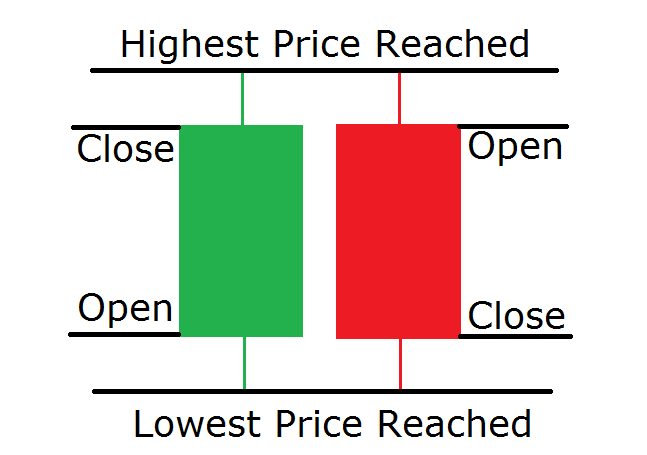 This simple sketch points out all the information a Japanese candlestick will give you. The two candles displayed are a bullish (green) and a bearish (red) candle. Each candle shows the price at which the candle (the time frame) was opened, the price at which the candle was closed, the highest and the lowest price reached. Note that the bearish candles (red) move downwards, so “close” and “open” places are switched. Now look how Japanese candlesticks looks on a price chart.

How to use Japanese candlesticks?

Trading price action using candlestick analysis alone is a very common trading technique. Yet, candlestick trading tends to be the most powerful when confirmed with additional indicators or when combined with Support & Resistance!

Candlestick patterns in Forex are specific on-chart candle formations, which often lead to certain events. If recognized on time and traded properly, they can assist in providing high probability setups.

Doji is a very easy to recognize candlestick. We have a Doji whenever the price closes at the exact same level where it has opened. Thus, the Doji candle looks like a dash with a wick.

Note that sometimes there are cases when the price doesn’t move at all from the opening. In these cases the Doji candle is simply a dash with no wicks. Take a look at this image: 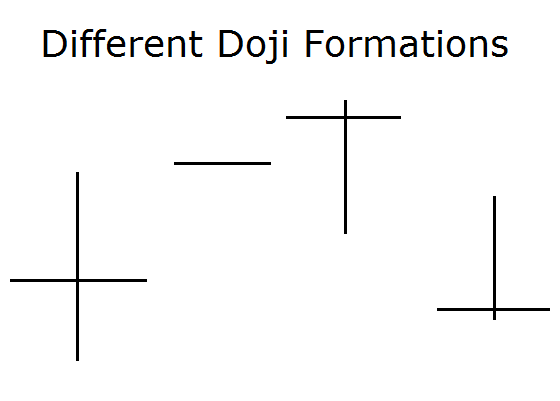 The Doji candle has a reversal character when it is formed after a prolonged move. The reason for this is that during a bullish (or bearish) market, the occurrence of a Doji candle indicates that the bulls are losing powers and the bears start acting with the same force.

Thus, the candle closes wherever it was opened. Just remember: when you get a Doji on the chart after a prolonged move, there is a chance that the price will reverse its direction.

This candle could be bearish and bullish. It has a very small body and longer upper and lower candle wick, which have approximately the same size. Have a look at the image below: The Spinning Tops have undefined character.

The reason for this is that this candle indicates that buyers and sellers are fighting hard against each other, but none of them could gain dominance.

Nevertheless, if we get this candle on the chart during a downtrend, this means that the sellers are losing steam, even though buyers cannot prevail.

This is another easy to recognize candle. The Marubozu candlestick has a body and no candle wick as shown below: The Marubozu candle is a trend continuation pattern. Since it has no wicks, this means that if the candle is bullish, the uptrend is so strong that the price in the candle is increasing and never reaches below the opening of the bar

The Hammer candle and the Hanging Man candle have small bodies, small upper wick and long lower wick. These two candles look absolutely the same. Here they are: The Inverted Hammer and the Star are the mirror images of the Hammer and the Hanging Man. They have small bodies, small lower candle wick and long upper wick as shown below: The Tweezer Tops consist of a bullish candle, followed by a bearish candle, where both candles have small bodies and no lower candle wick. The two candles have approximately the same parameters.

At the same time, the Tweezer Bottoms consist of a bearish candle, followed by a bullish candle. Both candles have small bodies and no upper candle wick as shown in the image below: As we said, the two candles of the Tweezers have approximately the same size. Both candlestick patterns have reversal character. The difference between these two formations is that the Tweezer Tops signal a potential reversal of a bullish trend into a bearish, while the Tweezer Bottoms act the opposite way – they could be found at the end of a bearish trend, warning of a bullish reversal. Both of these candlestick groups have reversal character, where the Evening Star indicates the end of a bullish trend and the Moring Star points to the end of a bearish trend.

The Three Soldiers candlestick pattern could be bearish or bullish. The Three Bullish Soldiers consists of three bullish candles in a row:

At the same time, the confirmed Three Bearish Soldiers should have the following characteristics:

The image below displays a valid Three Bullish Soldiers and Three Bearish Soldiers: The Three Soldiers candlestick pattern has a reversal character.

The Three Bullish Soldiers candlestick pattern can end a bearish trends and can bring about a new bullish movement. At the same time the Three Bearish Soldiers could be found at the end of bullish tendencies, signaling an upcoming bearish move.

Now that we have gone through some of the more reliable candlestick patterns in Forex trading, we can now see how some of these patterns look on a price chart and how we can use them as part of a forex strategy.